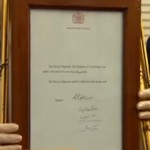 Who decided we were all excited?

Where did the memo come from stating as fact a collective holding of expectant breath? Not just in the UK but all over the world: All of us were apparently desperate for the happy news of the royal birth. All of us were thrilled to bits when the baby boy’s arrival was announced.

Except even the most basic analysis suggests we weren’t.

“The world waits” was a headline on the BBC’s online page for much of Monday after the Duchess of Cambridge went into labour. It was a strap-line for most of the day on the BBC’s rolling news channel where desperate reporters filled for hours while, in the case of one now wildly popular presenter, admitting they had nothing to say.

Across TV and radio channels, veteran royal watchers (nearly all elderly men) wittered on about “history in the making.” Beaming news anchors told us we could barely contain ourselves in our excitement over the arrival of the royal child.

But evidence of a global delirium is hard to find. A quick scan of newspaper sites from Indonesia and Ohio to Uganda and Kenya suggested not a jot of interest in the impending arrival of the third in line to the throne. (With the one exception being the Straits Times in Singapore). The Arab media has barely mentioned the news at all.

The birth itself prompted only slightly more coverage, little if any of it celebratory. Much of what foreign newspapers write merely reflects back at us what we’ve been told: that the entire British population is as besotted with the child as the new parents must be.

I blame in part the TV networks, particularly in the US. As the near-obsessional devotion to Downton Abbey suggests, Americans love it when their dated notions of a quaint old Blighty are confirmed. A beautiful princess, a future king, what could be more perfect for what passes as news on today’s celebrity driven infotainment TV?

In Canada the Queen is head of state and there’s a genuine affection for the royals. But that affection’s being manipulated by Conservative Prime Minister Stephen Harper who’s been busy re-shaping Canadian institutions to reflect long-lost ties with the UK. (Critics say it’s his way of countering multi-culturalism) The armed forces have had the word “Royal” added to their titles and their Maple Leaf insignia replaced by the crown. Canadian Embassies have been instructed to hang portraits of her Majesty on their walls.

So I understand and almost forgive the Canadian and US media for going over the top, but not the media here.

Somewhere it was decided that the British were all-a-flutter over the royal baby. That became the story regardless of the facts, and nobody has listened to the public ever since.

Not even the Royal-obsessed Daily Mail or indeed the establishment-friendly Telegraph. Comments on their abundant royal baby pages suggest a certain indifference – at best – amongst their readers. At least amongst those bothering to write in.

The once avowedly republican Guardian clearly got the mysterious baby directive (email? telephone call? sofa conversation? Who knows…) stating that all of Britain would rejoice. But their extensive and largely glowing coverage was met by reader gripes about the cost of the royals and the predictable arguments about whether we’d all prefer a “President Blair”.

And what of the gushing torrent from the BBC – an organisation committed to (and largely practicing) balance and impartiality on all other issues? It may have looked like a throng of people outside Buckingham Palace but in the scheme of things, they were a tiny proportion of the population. Never mind. They were the people whose enthusiastic views were sought and put on air.

Where were the counter-views of the vast majority who, my unscientific online scan suggests, might wish the parents and child well but don’t want to hear much more about it. And where was the evidence of the waiting world and the global celebrations? (Pro forma and utterly predictable congratulations from foreign leaders aside)

I fear the already bruised BBC couldn’t face another walloping by the government or the right-wing press. With last year’s disastrous coverage of the Thames Jubilee Pageant still haunting minds, editors clearly swallowed the cool-aid and gave us wall-to-wall baby-happy TV.

So the official line was created. Britain was going nuts for the royal birth. The foreign media picked it up and told their audiences we were going nuts. The coverage on news channels abroad fuelled the frenzy here.

Nobody asked the public (I don’t mean the self-selecting palace visitors) what they thought. And when we told them via twitter or comments pages, they took no notice.

So much for user-driven content and interactivity. A cabal of Old Media decided the news line and then told us what we, the weary public, believed.