Here are examples of just some of Claire’s stories and photos for BBC websites.

In 2011 Claire went to Portland Oregon to report on China and the US friends or rivals?   You can also see photos from the Portland trip

Claire went to meet people on both sides of  the debate over the Niqab in France in March 2010 when the French government moved to ban Muslim women from covering their faces.

In 2009, she travelled to Singapore and Indonesia to report on the impact of the global economic crisis.  This (from the bottom up) is her online diary of the trip. 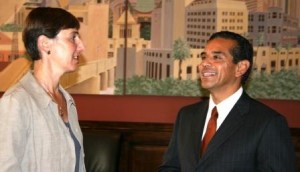 Later that year, Claire went to cover recession-hit southern California where Sub-Prime Mortgages were invented. Claire met some of those involved in the risky Sub Prime business.

She looked at the impact of the recession on vulnerable residents of Los Angeles, including ex-gang members trying to get jobs  and she interviewed Los Angeles Mayor, Antonio Villaraigosa.

Claire was one of the BBC reporters blogging from the campaign trail during the 2006 Congressional elections in the US which resulted in big swings to the Democratic Party across the country. Claire travelled through Tennessee, Kentucky and Ohio.  Here are extracts from the US midterms reporters’ blog