(Part 2 of my story about the chaos that’s followed the awarding of a key public service contract to a private company and the impact that’s having on vulnerable people. You can read Part 1 here).

We Experts by Experience badly needed one when we watched the Care Quality Commission’s recent board meeting online.

We’d just been told that our jobs inspecting health and social care facilities were being transferred from a charity to Remploy, a private company majority-owned by a big US-based business. None of our previous terms and conditions would be honoured. We would be invited to re-apply for our roles – at around half the pay.

Bruised and confused, we tuned in to see what the CQC, which is responsible for the contracts, had to say.

Thud. That’s when our collective jaws hit the ground.

This particular “piece of procurement activity,”  took two and a half years to complete.

As I predicted last week, it has resulted in a shortage of Experts capable of doing the job, and in a contractor that is clearly overwhelmed.

So much so that the charities which lost the contract for supplying Experts by Experience have now been called back in by the CQC to stop the scheme going off the rails.

Remploy won the Experts by Experience contract in three out of four English regions. (In a curious fragmentation of the programme, Central England remains with the charities Choice Support and AgeUK who, incidentally, will continue paying a decent wage).

That was announced in early December 2015. Those of us affected (the majority of Experts) were told we would be transferred seamlessly to Remploy. It would likely be done under TUPE, a process designed to protect workers when the business that employs them changes hands.

But Remploy had other ideas. And on January 13th we were told there would be no TUPE transfer after all. Instead, we could all apply to the new contractor for the same Expert jobs – with a 51% pay cut.

Two days later, in response to my query, Remploy confirmed the new terms and conditions in a list of FAQs. Under the new contract, they would be paying us £8.25 per hour (£9.40 in London). Unpleasant, but perfectly clear. 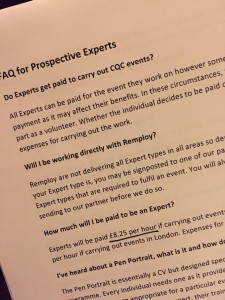 But then came that CQC board meeting.

“This contract is still in the process of being finalised,” said Chief Executive David Behan. “Detailed workings” would be discussed later that week he said. There were “issues that do need to be settled.” What’s more, there had been “inaccuracies” in what we had been told by AgeUK. He was clearly implying that we Experts had been misled.

We scooped our jaws off the floor and began scratching our heads.

The new contract was due to start in less than two weeks. Remploy had sent us their detailed terms and conditions – yet the CQC was still negotiating?

Two possibilities: Either they’d been unaware that Remploy intended to slash the wages of its Experts in half. Or the CQC had naively assumed we would simply accept the pay cut, ignore the implicit insult to the people we represent in care homes, and meekly hop aboard the private sector bandwagon charging through public services.

When we didn’t, a frantic backpedalling got underway.

Two days after the board meeting, the CQC announced that existing Experts who applied to Remploy would get £15.00 per hour for the first six months after they transferred.
An email from Remploy confirmed that temporary rate, helpfully adding that any decision to join them was entirely up to me.

I clearly wasn’t the only person un-wooed by the six month bribe.  At which point CQC backpedalling turned into blind panic.

Last Thursday, just four days before Remploy was due to take over the Experts by Experience programme, the CQC announced a further change.

If we signed up with Remploy we’d get £15.00 per hour for the first six months, and £12.50 per hour for the six months after that, with no decision yet on what the final level of pay would be. (I think we can guess. After all, new recruits are getting £8.25).

And still Remploy was struggling to get the programme fully up and running by the February 1st start date.

Some Experts by Experience who did express an interest in joining the private company have had no response. Others were immediately passed on to sub-contractors whose contact has been equally patchy.

A few were asked to do inspections . They were told to send in scanned copies of their criminal record checks. (Not the normal practice.) None were offered a contract, asked for their bank or National Insurance details, or given the reporting template needed to do the job properly. None have yet been issued with formal ID. I could go on…

Meanwhile a sub-contractor which ran an Experts by Experience recruitment day in January, has pulled out of the scheme. A spokesman wouldn’t say why, just that “the partnership [with Remploy] has ended.”

Not surprisingly then, the CQC desperately needs help. And who better to turn to than the charities that successfully ran the programme for years. The CQC has now asked Choice Support and AgeUK to supply Experts for inspections for the next two weeks – presumably at the Commission’s (that is, the taxpayers’) expense. The charities are by all accounts doing their best to oblige.

And after that? Who knows what’ll happen. The terms of the contract, and details of its execution and delivery have been changing almost by the day.

No, Mr Behan, this was not “a very very good piece of procurement activity,” at all.