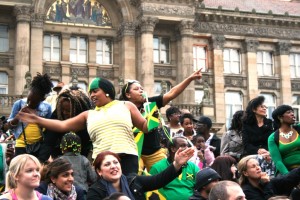 I never had any doubt that Danny Boyle’s Olympic celebration of proud, multi-cultural, contrarian Britain was spot on.  I loved every minute of the opening ceremony’s anarchic creativity. It even prompted my first ever act of patriotism. Incensed by the cynical tweets of a critical American, I clicked “unfollow” and banished him from my Twitter stream for good.

I’m a Londoner. Born and bred in a vibrant, diverse city that has hummed with excitement as the medals have come pouring in, of course I’m infected by Olympic fever.

But I wondered whether the glow extended to the rest of a country beset by economic gloom, where spirits have been dampened by high unemployment and months of near-endless rain.

First stop Birmingham, on the busiest weekend of the Games. When I first got to the city’s Victoria Square at 6pm, there was just a handful of spectators slumped in deck-chairs or sprawled on the steps in front of the Olympic Big Screen. They were barely glancing at Andy Murray’s doubles finals.

But then the local Jamaican community arrived to watch the men’s 100m final and a damp Sunday evening turned into a glorious party wrapped in black, gold and green.

They weren’t just there to cheer on Jamaican legend Usain Bolt. Earlier, two elderly men with rich Jamaican accents looked almost hurt when I asked whether they supported the British team.  Then, as the women lined up for their 400m heats, a middle aged afro-Caribbean woman waving a Jamaican flag yelled “come on team GB”. 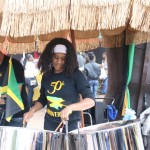 There were loud whoops as Britain’s Mo Farah mounted the podium to collect his 10,000m gold. And when at last Usain Bolt surged over the finish line in the sprint final, the white spectators roared just as loudly as the black.  Not quite as good as being in the stadium itself, but for buzz and bonhomie, a close second best.

But that was Birmingham.  A big multi-cultural city where people of Jamaican heritage were gearing up for the home country’s 50th anniversary celebrations and in a mood to party.

I found far less to cheer about in Jaywick.

Built originally as a holiday resort for workers in London, about 120 km away, the small town on the Essex coast is officially the most deprived area in England. 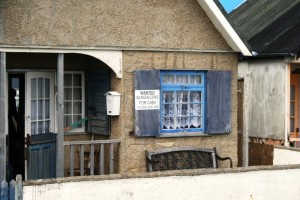 Many of the homes, never meant to be permanent residences, are poorly constructed. Some are boarded up; others are in a state of disrepair. An amusement arcade on the sea front is closed; the main high street offers only a handful of convenience stores and a couple of run down cafés selling fish and chips or take-away Chinese meals.

In a large, almost empty pub, the Olympics were on TV.  Two old men staring into half-finished pints at one end of the bar didn’t seem to be watching. But they surprised me when I asked how Britain’s Brownlee brothers had done in the Triathlon. They knew, telling me  the younger brother had won the bronze medal and  the older one the gold.

At a café near the beach I met two women drinking tea with their teenage granddaughters. They told me they spend all their summers in one of Jaywicks trailer parks. As for the Olympics, “we cheer when we win something” said one of the women “but apart from that, we don’t really notice the games”.  London they all agreed, felt a long way away. 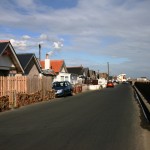 I said that Jaywick, with its long gritty beach, seemed very quiet for a seaside town at the peak of holiday season. One of the women said that was partly because the weather had been so bad. Then the other chipped in “and because of the recession”.

Ah, the recession. The Olympic Games are a welcome distraction but they will be gone in a few days time. Britain’s dire economic situation will be exactly the same. On the morning after the UK celebrated its greatest gold medal haul in more than one hundred years, the Bank of England announced there would be no economic growth at all in 2012

The economic policy of the Conservative-led government is to focus on cutting Britain’s debt, largely by shrinking or even dismantling the state.  I’ve written about the impact of that before but with the chorus of demands for an alternative – a so called “Plan B” – growing louder, are there lessons to be drawn from the London Olympic Games?

When asked why cycling has been such a resounding winner at the Games, Sir Chris Hoy, his two London medals clinking around his neck, specifically mentioned the big investment in his sport over the past 15 years. That’s government investment.

It’s done mostly through UK Sport set up in 1997 to invest about £100 million a year of public funds (from the National Lottery and from taxes) in the sports men and women most likely to succeed. For specific events like the Olympics, an additional £20 million has been raised through private sponsorship which is channelled to the same athletes. (The BBC’s John Beattie  has an excellent breakdown of how and where the funding has led to a gold rush).

The lesson is that a clear vision, supported by state-led investment, works. No wonder some businesses and many economists  are crying out for an industrial policy.  If government can decide what it wants to achieve in sport, put the money on the table and deliver spectacular results, then why not try the same for an economy that has completely lost its way?

It’s a question of imagination and commitment,  of investment and of the public and private sectors working together towards the same goal. It’s also about having a sense of national pride.  We’ve been a bit diffident about that in the past, surrendering our flag to the xenophobic parties on the far right, whispering patriotism as if it were a dirty word.

But Danny Boyle reminded us we can both laugh at ourselves and rejoice unashamedly in what we’ve achieved – as individuals and as a nation – and that’s what we’ve done during the Olympics. So if we set our minds to economic recovery, if that were the national vision we rallied behind, who knows. Maybe even Jaywick would feel a touch of the gold. 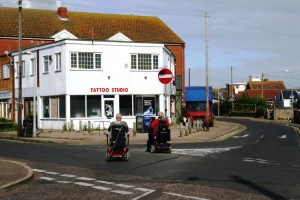 One thought on “Going for (Economic) Gold”