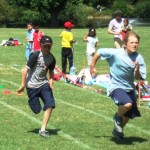 The fact is, like so many stories from inside the Westminster village, the row over school sports fields is a red herring; great for political point scoring,  nothing to do with kids and sport.

And even less to do with future Olympic triumph.

Most of our Olympians came up through local clubs not schools. In track-side interviews, still breathless from their efforts, almost all pointed to the National Lottery and other public funds as key to their success.  Even hurdler Lawrence Clarke, heir to a baronetcy no less, only got serious about sport at university. School (Eton) he said, was of little help. The public money directed towards individuals like him, was.

Double gold winning distance runner Mo Farah may have been spotted and encouraged by a school PE teacher but he ran on a public track. It is now apparently derelict.

And that is what we should be discussing: the need for investment in community sports facilities.

School fields are often many miles and long bus journeys away from the institutions they serve.  Much better to have a good gym and a hall that can be used whatever the weather.

The vast majority of school fields are closed outside school hours. Public facilities available to communities year round are of more use. The coaches and specialist staff that many of them host are more valuable than any PE teacher, however committed and skilled.

But even before the coalition took office in 2010 and began its massive spending cuts, the Daily Telegraph had started a campaign to halt the decline in community sports facilities. Since the budget-slashing spending review that followed the election, leisure centres – along with libraries and other “recreational” services – have felt the squeeze.

Sport England, the body responsible for community sport saw its government grant slashed by 33% and its capital budget reduced by 40%.  All over the country, sports-related charities funded by local government have been axed.

Meanwhile the Prime Minister and the Education Secretary talk of wanting to change the culture in schools. There must be more competition they say, and an end to the leftie notion that everyone must have prizes.  That’ll make Olympians of us all.

It’s another red herring. Nobody in government has ever offered a shred of evidence to back their claims about prolific loser egalitarianism. A quick look at some of my local school websites confirms that competitive sports days with cups and trophies are very much in vogue, even in staunchly Labour Islington.

The battle of Waterloo may have been won on the playing fields of Eton. The battle for healthy, active children won’t be won on the soggy, expensive-to-maintain fields of our cash-strapped schools. Yes, they should have sports facilities. Yes, teachers must encourage sporting activity and identify those who excel.  But let’s fund grassroots community facilities and clubs with first-class trainers and talent spotters of the sort that led Mo and Jessica and all the others to Olympic gold.

3 thoughts on “The Playing Fields Myth”