Me and Mrs T

A former dock worker, 60-ish, ruddy-cheeked, and too big for the bar stool in this central Liverpool pub.  Not somebody I’d expect to find channelling my thoughts. But yesterday, we were in tune on Margaret Thatcher.

This past week and a half, I have avoided almost every word written about her. I have turned the pages of the newspapers unread, ignored the radio and television programmes, written nothing, and commented only once. (I was caught off guard when CBC Montreal called in the middle of lunch, broke the news of the former Prime Minister’s death, and put me straight on air.)

It’s not that I lack intellectual or even journalistic interest. It’s just that I simply don’t care. My fight with Mrs Thatcher was over long ago. It started in the sixth form of school, and raged through university when I marched against apartheid (she regarded the ANC as a terrorist organization) and her government’s homophobic Section 28.  I yelled ‘Maggie Maggie Maggie, Out Out Out!” when required, and stood quietly at the silent vigil that persuaded Oxford Dons to refuse her an honorary degree.  I did my bit as I saw it at the time. (My views have since benefitted from perspective: I remember what came before – and after.)

So forgive me, but my emotions are long since spent where the Iron Lady is concerned.

The former docker felt the same. “Don’t get me wrong, I hated her,” he said. “But that’s the past, what’s the point of going over it all now?” We agreed it was time to move on and talk about today. The bedroom tax (“not a tax, a benefit cut,” he corrected me). Unemployment – still higher than the national average in Liverpool despite regeneration that has physically transformed the city since I last visited nearly 30 years ago.

“Get rid of the current government,” my new friend said, adding with a disconcerting glare, “the whole lot of them.”

Not that he was a fan of Labour’s Ed Miliband. “Why isn’t he fighting?” he asked. “He should be shouting about what’s happening.” This ex-docker was getting dangerously deep inside my brain. I shook his hand and left.

Less than a mile away, in the vast neo-classical elegance of St George’s Hall, I found a tea dance in full flow. 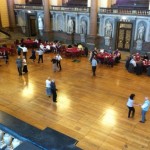 Couples waltzed and tangoed in a magnificent ballroom, with statues of great Victorians lining the walls. For decades this grand public building, once home to the courts, lay abandoned and decaying. A symbol of a city that, as Mrs Thatcher’s Chancellor advised her,  should be left to “managed decline”.

St George’s was brought back to life with a huge injection of lottery funds. Much of the rest of the city centre got up off its knees with government money leading the way. In 2008, Liverpool’s tenure as European Capital of Culture was a stunning success. Millions of visitors came, though one of the tea-dancers complained to me that “down south”, Liverpool didn’t get the credit it deserved.

But it survived, and according to residents is a better place to live now than before 2008. Maybe that’s another reason my ex-docker could let Margaret Thatcher go in peace.

As for me, I made a peace of sorts a couple of years ago when walking on a Saturday afternoon through one of the Inns of Court in Central London. There wasn’t a soul around. A car pulled up and a driver helped a beautifully turned out but frail old lady to her feet. Having gained her balance she instinctively looked around and seeing her public (my husband and me) smiled warmly and waved. I admit I was impressed and didn’t hesitate for a second.

I waved and smiled equally warmly at Mrs T.