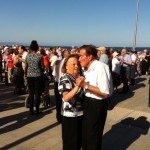 If, as Mahatma Ghandi said, “A nation’s greatness is measured by how it treats its weakest members,” then I might move to Spain.

True, Spain is going through unprecedented economic turmoil. The $36bn in spending cuts planned this year probably won’t be enough to get its budget deficit under control. Unemployment is at a record high 24.4% (twice that rate amongst the young), public sector salaries are being frozen and taxes are going up. It’s tough for everyone certainly. But there’s something about the language of austerity – and the values that reflects – that gives one hope. 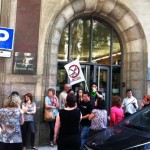 Neither unemployment benefits nor public pensions are being cut, value added tax is left unchanged while taxes on the wealthy have already been raised.  Plenty of critics of Spain’s bloated public sector and generous welfare state would quibble with the economics of that, but what about the values it reflects? Aiming for healthy public finances is all very well, the deputy Prime Minister Soraya Saenz de Santamaria explained at the time of the budget “but not at any price.” And (bear in mind it’s a centre-right government in Spain) she added that “we have to support those who are in most need and not slow down the necessary recovery.” Quite a contrast to George Osborne’s “tough but fair” welfare cutting, VAT raising budgets in the UK. 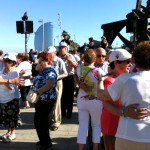 I was reminded of this on a warm June evening in Barcelona, as several hundred elderly people gathered around a band on the sea-front. Most sat watching and listening but in a large space at the front, many others danced. There was a waltz, a paso doble, a bolero, every conceivable style – all announced by one of the young women on the stage. The couples (a shortage of men meant some women danced together) launched into steps learned decades earlier but still remembered and executed perfectly. Young carers spun and slid the wheelchair users around. Volunteers stood ready to hand out sandwiches and drinks. All of it was organised by the City government. And why not said one volunteer: “There are so many things for young people, it’s only fair to provide something for the elderly too.”

That fits with the Mayor of Barcelona’s plans for getting through the tough times. Xavier Trias, who’s from a liberal regional party, wants to make Barcelona a centre of economic innovation and growth for the whole of Catalonia. But he says his priority is “improving the well being and quality of life of the people.” It’s probably easier for him than most other mayors to increase spending on social services as he’s done. Tourist heaven Barcelona is doing better than many other cities. In Spain’s patchwork of autonomous regions, the economic pain is not evenly spread. 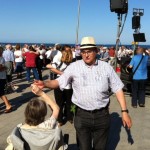 I’m no expert on the Spanish economy and I know many of its people are struggling every day – and preparing for worse still to come.  As in many countries, the elderly are having to support children they’d seen off into the world years ago while at the same time, paying higher prices for electricity and food. But at least they’re not blamed for their predicament as the vulnerable so often are in austerity Britain. At least they’re not patronised with the “we’re all in this together” mantra while cuts and tax rises fall disproportionately on the poor. Instead, dignity intact, they’re invited to dance as the sun sets on the waterfront.