Why is Education Secretary Michael Gove setting children up to fail? 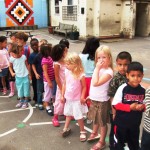 His highly prescriptive, not to say idiosyncratic approach to what’s learned in schools (to be formally announced later this week) amounts to a random list of musts and shoulds that have little relevance to real children’s lives – nor to how they learn. Of course every effort should be made to get children reading fluently and, just as importantly, to enjoy reading and understand what they’ve read. How learning poetry by heart for classroom recitals (i.e. learning by rote) at the age of five helps is not at all clear. I’m curious too about the government-dictated list of spellings. Which minister or mandarin gets to choose the words?

Then there’s the new emphasis on phonics – learning the sounds of letters and letter combinations (brilliantly debunked by children’s author Michael Rosen in the Guardian). The first national tests for Year 1 children start next week.  Nonsense words will be included just to make sure the children have learned the strict phonics formula rather than any other way of reading and understanding real words. All this, says the Department for Education, is because Mr Gove is determined to make English teaching at primary schools “more rigorous”.  Which means, for many already struggling children, much harder to achieve.

I am not arguing against benchmarks, targets or even testing.  All of those have helped to improve standards in primary schools over the last 15 years (so has the substantial amount of money poured in by the Labour government  but that’s another story). But what about the children who, however hard the best teachers work, cannot make the grade?  They may be struggling for many reasons, poverty or a chaotic family life being amongst the most common. (Children formally classified as having Special Educational Needs (SEN) are much more likely to be eligible for free school meals – an indicator of social deprivation – than the average school population).  In primary schools, most of the kids with SEN take the same tests as the more able ones so what happens to them when they fail?

Well, given the wrong circumstances, the prospects aren’t good. One of the most shocking findings to emerge from research into last summer’s riots was that two thirds of the children who ended up in court had Special Educational Needs and on average missed almost one day of school a week.  As a report by the government’s Riots Communities and Victims Panel says, nobody believes that’s an excuse for criminal behaviour. But it does provide some explanation for it. Interestingly, the vast majority of rioters were under 24, the most tested and target-set generation we’ve ever seen (the first SATs tests were introduced in 1991). Also the generation that’s experienced the closure of hundreds of special schools and an emphasis on inclusion in the mainstream. “Most disturbing to us” says the Riot Panel report, “was a widespread feeling that some rioters had no hope and nothing to lose.” And it quotes one of its many interviewees as saying, “Some people get to 14 or 15 years old without ever being told they’re good at anything. They feel a sense of worthlessness.”

Good schools know how easy it is for less able children to be put off learning, and how failure affects self-esteem. Yes, they teach spelling and grammar (they’ve been using phonics as a tool for years), and get their students to read poetry and study art (I’ve heard six and seven year olds at an inner London primary school wax lyrical about Georgia O’Keefe). But they also structure lessons so that children can learn at varying paces. And most importantly, they’re changing the culture of learning to focus on achievement rather than ability and on the active participation of the child. It means re-thinking the language used in assessment, and encouraging children to work out what they find difficult and how they might tackle a tricky subject differently next time. Pupils have to talk more about their work (including to each other, thereby exercising those verbal and team work skills that employers say more children need) and teachers adjust lessons to allow children to come up with their own questions.

This type of approach is not an easy way out for teachers. It requires much more work with each individual child than supervising a test or handing out a list of required spellings. Not all schools are doing it well enough yet, but it is rooted in academic research and expert practice. Which is more than you can say for most of the instructions issued by Michael Gove. The Secretary of State for Education says he’s passionately committed to helping disadvantaged children maximise their potential. It would help if he didn’t make those kids who struggle with school feel like failures from the start.