Outraged by the Outrage 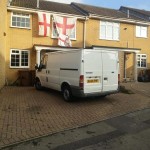 Here’s how politics now works in the UK.

A politician sends out an ill-considered tweet. It is insensitive but not criminal. Politicians, political journalists, bloggers and academics comment on it. Twitter comes alive. The politician realises she’s been a bit of a fool. Her hapless boss has a meltdown and forces her out. The established media and punditocracy go bonkers.

And the rest of the country says – Eh?

Of course Labour’s Emily Thornberry shouldn’t have tweeted a picture of a white van outside a house draped with English flags. It was way too open to interpretations of condescension or snobbery – which is exactly what happened.

But who did those interpretations come from?

Well, amongst the first 15 to tweet responses were: A blogger for The Spectator, a UKIP local party secretary, two self-described “libertarians,” a Daily Star journalist, a “media planner,” a Tory government relations consultant and two more who call themselves Conservatives (one of whom adds for good measure “anti-EU”) though it’s not entirely clear what they do.

Not, as far as I can tell, the supposedly offended flag-flying working class.

Westminster’s mischief-maker-in-chief was quick off the ball too. Guido Fawkes put the offending tweet on his blog and rapidly followed it with an update, “The internet reacts.”

A bit of the internet anyway.

The reactions selected (from twitter) were those of a leading politics academic, a Telegraph columnist, a Telegraph leader writer and someone who’s twitter profile is a little opaque but includes the phrase, “not a fan of the EU.”

And then the Internet really did start to react – most noticeably with anxious Labour MPs already aware of their party’s failure to offer anything constructive to its core vote. And then with political correspondents telling us “what it all means.”

A twitter storm in a tea-cup was brewed. Ms Thornberry fell on her sword.

Elsewhere in the country meanwhile, nobody seems to be taking much notice. This morning’s (internet) editions of the major regional newspapers barely cover the story – if at all.

Nothing in the Liverpool Echo or the Northern Echo. I can’t find anything in the Norwich Evening News. There are a couple of lines buried deep in the Yorkshire Post’s story about UKIP’s win in Rochester and Stroud. Sometime after 9am, the Manchester Evening news added two sentences on Thornberry in its Breaking News section.

The Sentinel in Stoke ran the story. It garnered one comment from a reader who couldn’t understand why the MP had had to resign her shadow cabinet post. The only other public comment was on a Bristol Post account of the fracas – though in that case, the reader was critical of Labour and its “Champagne socialists”.

I couldn’t find much anti-Labour white male wrath on quick flick through local radio either.

BBC Radio Norfolk’s morning phone-in was discussing a local row about skateboarding. In Leeds the host wanted to hear listeners’ “claims to fame.” I tuned to Radio Newcastle just as caller and host reached a peak of indignation over the film board’s classification of the Paddington Bear film. In Cambridge meanwhile, they were talking politics. A female caller felt UKIP was dividing the country with its anti immigrant stance.

None of which is to justify or defend Emily Thornberry and her ill advised tweet. We all do stupid things sometimes, on Thursday it was the turn of the Islington MP.

She demonstrated all too visibly the disconnect between politicians and voters for sure. But the general public aren’t up in arms about a daft tweet – it’s the navel gazers in Westminster who decided on our behalf we should all be outraged.

Meanwhile, most people are trying to get on with making ends meet. It would be good to see a similar level of outrage from our politicians and pundits about just how hard that is.