The Politicians We Deserve? 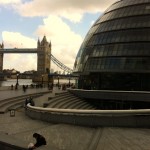 “Rubbish, rubbish, you’re talking rubbish!” cries the Mayor of the greatest city in the world.

“Boring, boring, boring!” chants an elected member of the assembly that’s supposed to be holding him to account.

Labour leader Ed Miliband worries that the weekly bun-fight at Prime Minister’s Questions in Parliament “subtracts from the reputation of politics.”

He should take a stroll eastward and cross the Thames. He’ll see how Mayor’s Question Time leaves that reputation in shreds.

The Mayor is of course, Boris Johnson who sits at the centre of a horse-shoe of desks. Behind him are the sloping glass walls of the City Hall chamber. Stunning views of the Tower of London, the Gherkin building and the river frame his famous blonde head. 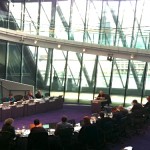 The subjects under discussion, including sponsorship of the city’s bike hire scheme and the budget for building new homes, are serious.

The debate, if one can call it that, is not.

Questions from the Labour members are often lengthy and repetitive. Answers from the Conservative Mayor are evasive at best. Attempts to get any firm information from Mr Johnson are met first with bluster and when that doesn’t work, with tired attacks on Labour. Amongst other things, he accuses them of being “consumed with hatred for the private sector” and of wanting to deprive the people of Lambeth of access to the hire bikes.

Ever the performer, the Mayor sprinkles his responses with mild insults (Labour members are like “passive Buddhas”) and belligerent clichés (“So put that in your pipe and smoke it!”)

When the audience in the public gallery, at least half of them primary school children, start to giggle, you can see the light go on in Boris’s eyes. Previously slumped, he sits up straight, his voice rises, a smile spreads across his face.

After barely half an hour, the Assembly Chair is exasperated. “When the Mayor gets found out he resorts to abuse of Assembly Members,” he exclaims.

He’s quite right. Tory members ask questions too – of the “would the Mayor agree with me that he is marvelous?” type. Another half hour passes and despite a couple of informed questions, we’ve learned nothing from the Mayor at all.

But incredibly, it’s about to get worse.

It’s the turn of Green member Jenny Jones to ask a question. She and the Mayor talk across each other. She accuses him of “making things up to amuse the audience.” So far, so predictable.

And then, out of the blue she describes Mr Johnson as being “a proven liar to Parliament.” Boris is completely unfazed and barely responds, even when she repeats it. But a Conservative member asks Baroness Jones to withdraw the accusation  – or substantiate it.

“I don’t have evidence to hand,” is her airy response. She then adds that the Mayor has accused her in the past of being a liar and “I don’t see the difference.”

Ed Miliband said last week that politicians give the public “the sense that their kids behave better than we do.”

The children watching from the public gallery in City Hall must have been wondering when someone would tell these two to shut up and behave. (Jenny Jones did eventually withdraw the accusation of lying to Parliament and later acknowledged breezily via twitter, “Oh god I think I shall have to apologise to Boris.”)

Soon after this unedifying exchange, low rumblings amongst a group of grown-ups in the gallery erupt into shouts. 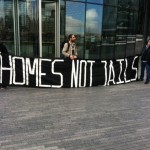 “Homelessness isn’t a crime,” yells one. “Homes not jails!” they start to chant. They’re protesting against Operation Encompass, a police campaign to deal with beggars and rough-sleepers.

The most vocal are hustled out of the chamber. One young woman is grabbed by the wrists and ankles and carried to the door after she refuses to budge.

“Boris is a wanker!” is the parting shot from the last to go. The stunned children let out a collective gasp, then start to laugh before being hushed by their teacher.

I really do think London is the greatest city in the world. But it has some massive problems, of which a dire shortage of affordable housing is perhaps the most acute.

I saw nothing in the City Hall chamber to suggest London’s representatives are working together to deal with that, or indeed anything else.

Surely, we deserve better than this.

2 thoughts on “The Politicians We Deserve?”